Well mother nature looks like she’s going to turn things around and start giving us in the north some warmer weather beginning next week.  Usually May things start to warm up and it won’t be long until we can begin putting out plants in the pond.

A good rule of thumb is always make sure your water temperatures are around 65 degrees before putting in new plants.  Think of it like taking a bath in cold water. You’d shiver too and be a little shocked. 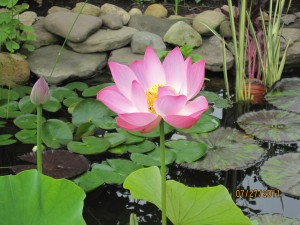 Lotus are a master piece in a water garden.  Their outstanding flowers and large leaves whether in your pond or container are a beautiful addition to your water garden. Lotus are hardy perennials and will reward you with exotic flowers year after year.

There are small, medium and large lotus.  Lotus won’t start to appear in the spring until the water temperature warms in the pond which is about 65 degrees.  In the colder areas where a lotus has been overwintered at the bottom of the pond, raise the pot so that it is just a few inches below the water surface and it will be warmed by the sun.  If you overwintered the lotus in peat for the winter don’t place it back in the pond until the water temperatures are 65 degrees.  Once the water warms up in the 70s the lotus will start to grow more rapidly.  They will begin to flower several weeks later than waterlilies, often not until late July and August in zones lower than 6 and zones earlier than 6 will begin earlier in July.  They continue to bloom until late September and October depending on your climate.

So whether you have a large pond or just a small container on your patio a lotus will grow.  I would suggest planting it in a large container and put in your pond, otherwise it could grow out of control.  Keeping it confined in a container eliminates this.  Planting it in a container it only requires a few inches of water over the tuber to grow.  So whether you plant a lotus in your pond or simply plant it in a small container and set it on your patio, you will be glad you did.

There isn’t much work to grow a lotus but the rewards are spectacular.

2 thoughts on “Much needed…warm weather”