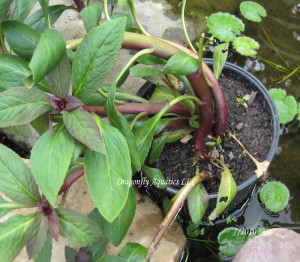 This is the Cardinal Flower I brought home from the greenhouse this spring and wondered at the time if it would straighten up.  The Cardinal Flowers were all nice plants this year but some were growing slanted in their containers.  The one I had planted a couple years ago didn’t survive.  Now I know we say “Don’t Drown those bog plants” so I should know better.  But too much water did it in, so I tried another.  This year I’m glad to report it bloomed and flourished.  It didn’t straighten up until it started to bloom.  I transplanted it after several weeks from its pot directly into my bog area and hoped that it wasn’t too late to prevent it from blooming.  I had wanted to give it some time to adjust to the water depth before I planted it directly in the pond but then I just got too busy to plant it.      Look how gorgeous the flowers are.  I think its a winner! 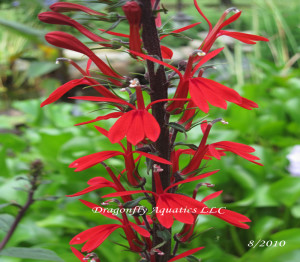 Not only did it get one flower but I have several more getting ready to bloom.  Now that its established it will spread to even a healthlier plant by next year.  At least that’s my hope.